I stayed in a new hotel during a recent business trip. I had stayed in it previously when it was operating under a different name. It was physically refreshed and had an air of “new” from the moment you walked in.

When I was walking to my room I noticed some interesting signs on the walls: 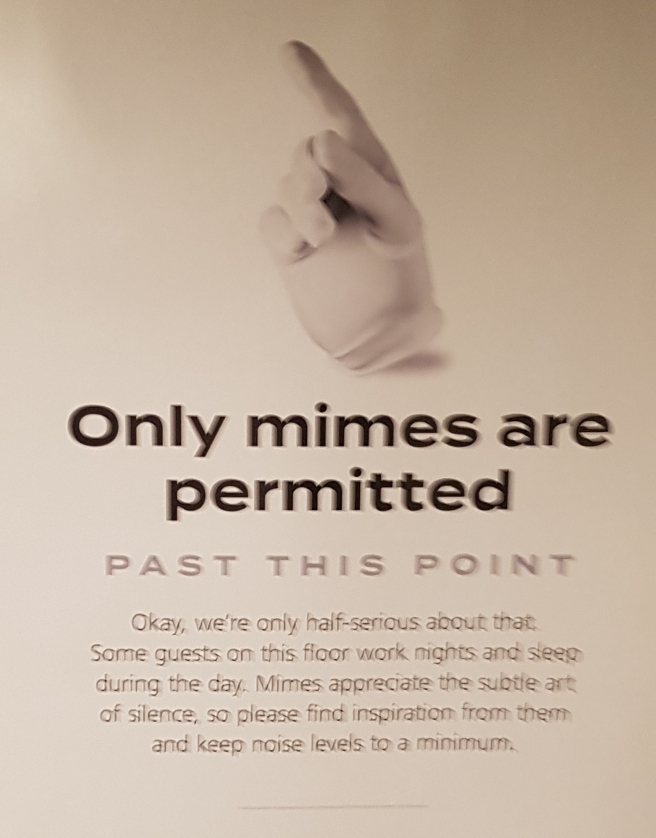 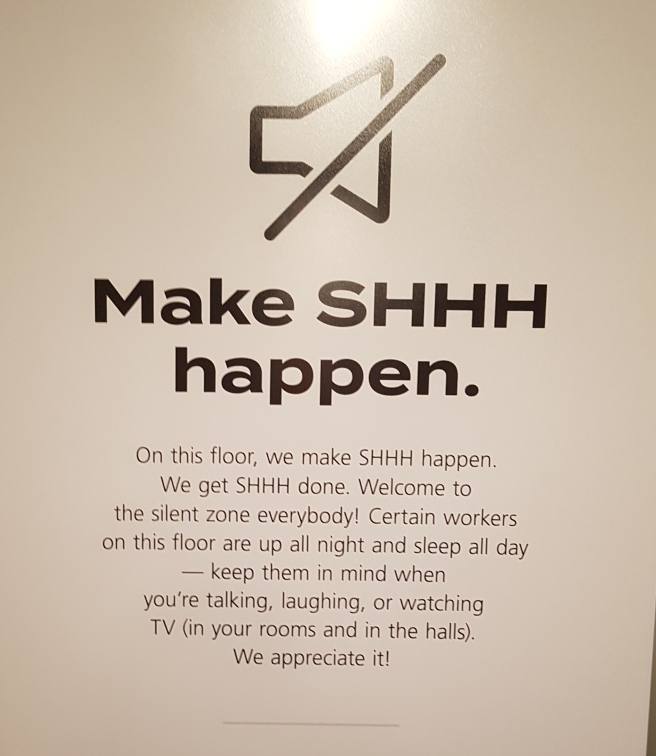 The note beside the coffee machine reads: 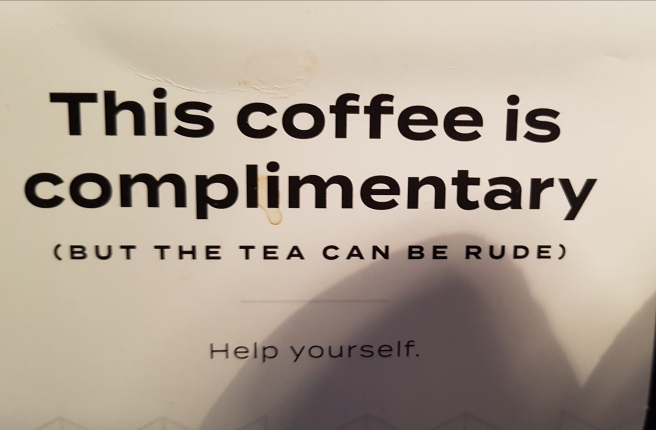 while the note beside the face cloths reads: 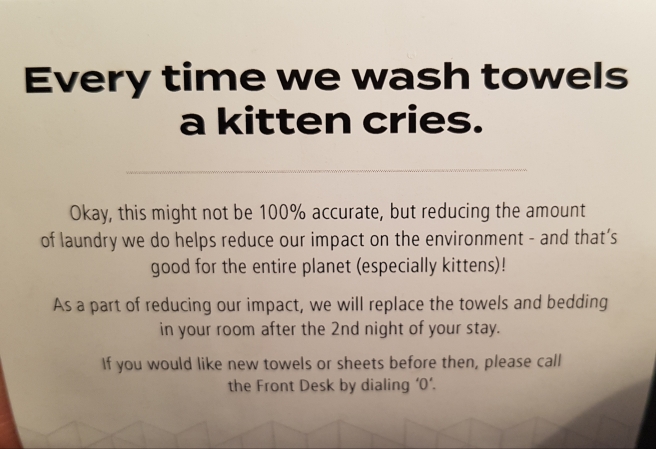 The writing paper was only one page, so I asked the housekeeping staff for another one as well: 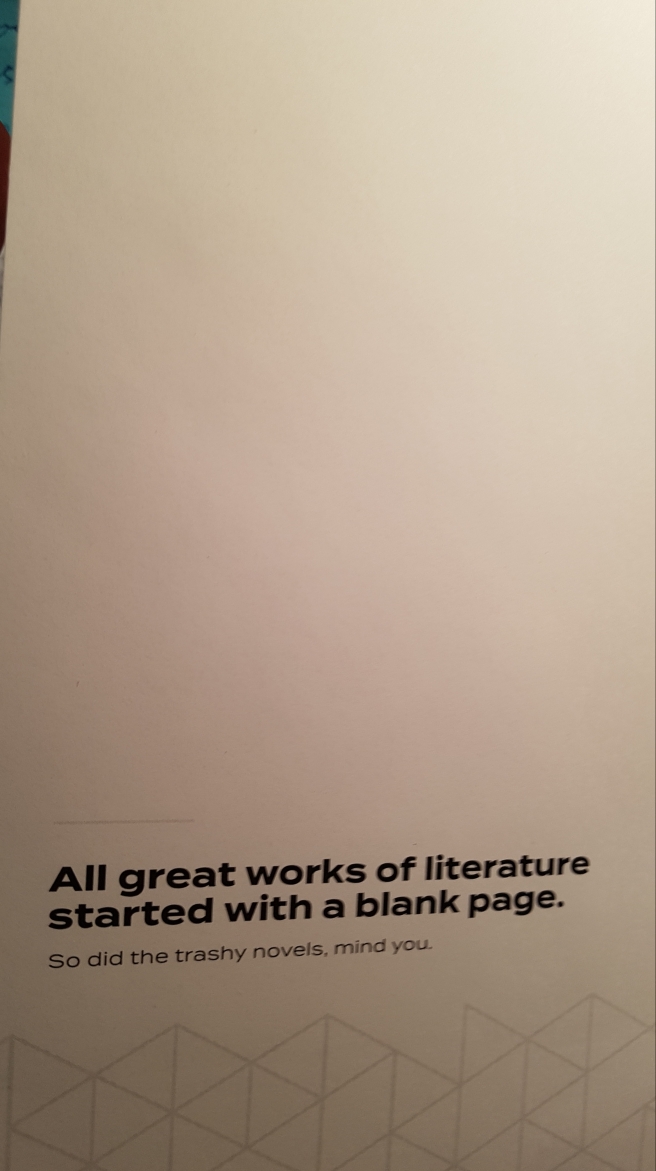 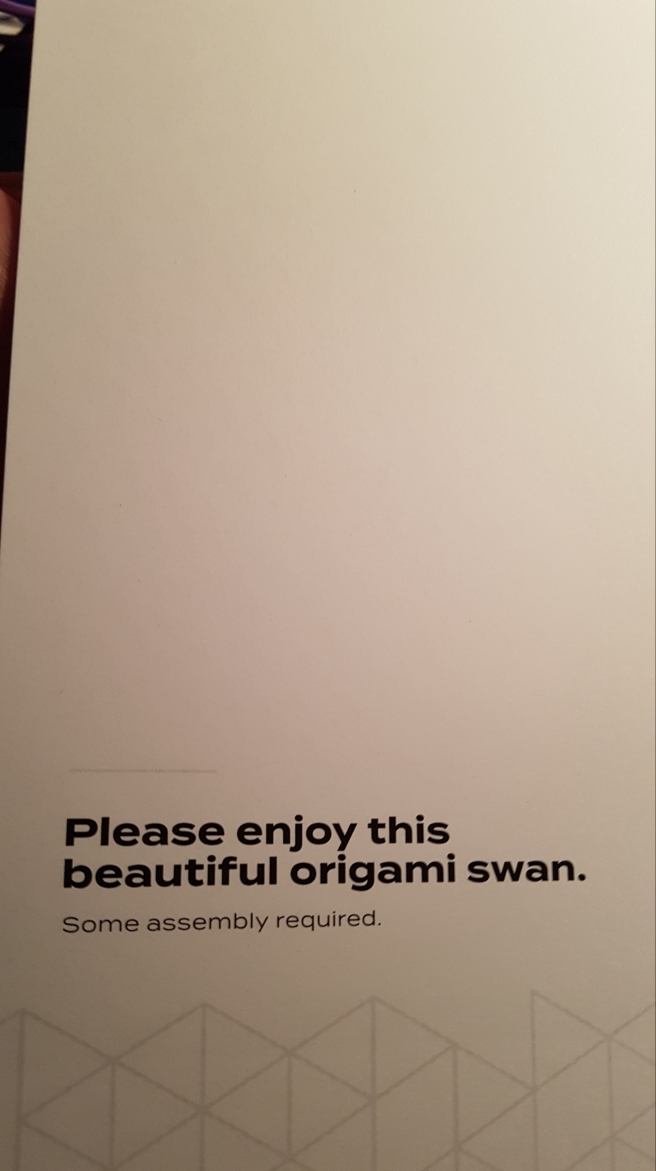 And even the door hangers had unique sayings: 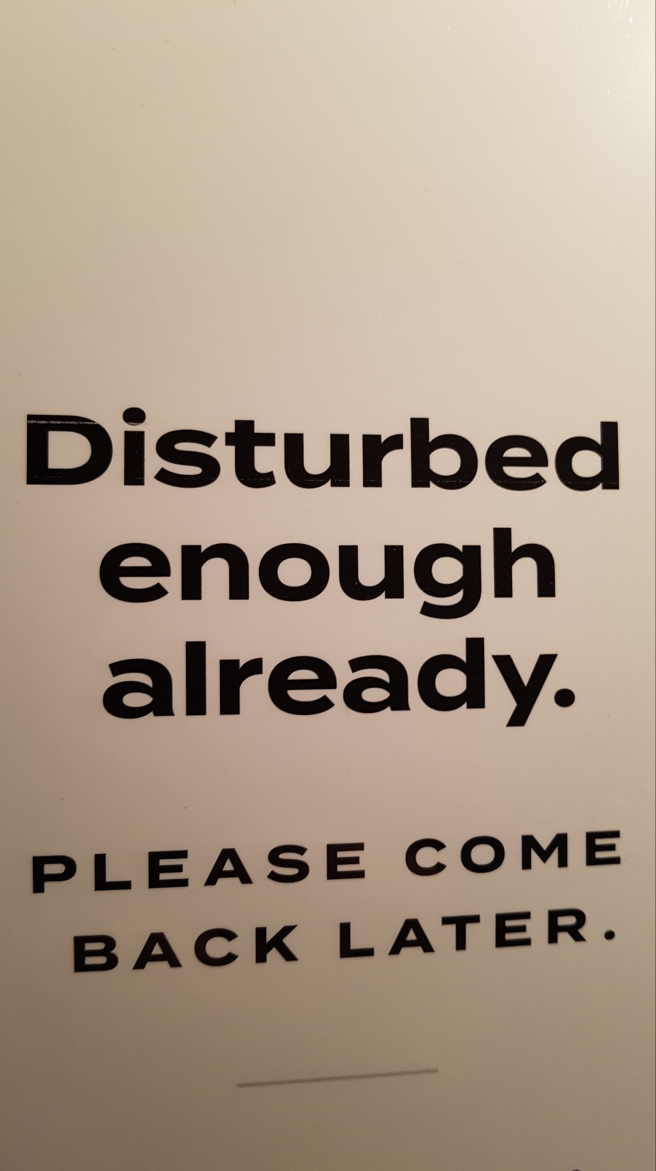 And finally, how about this attention grabbing headline from the menu doorhanger: 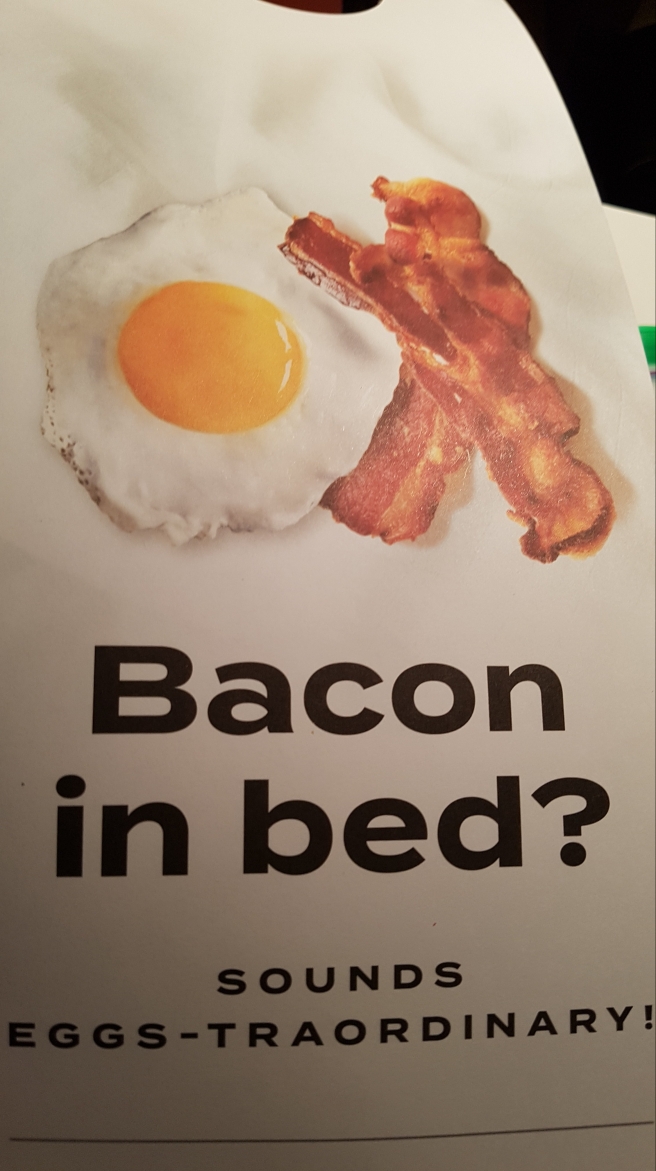 I love this stuff! Give me more!

Except…I was disappointed in the overall experience because it did not live up to these tasty tidbits of brilliance.

While the staff seemed mostly nice, there were some odd behaviours. For example:

There is a brand disconnect. And since a brand is the sum of all experiences you have with a product or company, and most importantly what you say about the product or company when they are not in the room, this brand gets a “D” because of this inconsistency. If someone in the marketing team has created all the wonderful messages, it is incumbent on the leadership to make sure the tone of the messages is lived throughout the guest experience.

Perhaps a Westjet flight crew can be brought in to demonstrate enthusiasm. But, only if this is the type of image you want to present to customers and anyone else you deal with.

So, how does your total customer experience stack up? Here is a quick 5-point checklist to help you get started:

Diligence and focus are requirements to a building and growing a great brand. The brand is so much more than a logo or tag line. It is the essence of everything that the company does for their customers – tangible and intangible actions.

ATD – Attention to Detail – can help you live the brand as you want to be seen.

Cute phrases on their own will not create the brand you want.

RIP TJ – you were a tenacious competitor with a big heart.

Jack Welch, legendary CEO of General Electric (GE) passed away on Sunday. He was only 84 years young. He was widely revered, and sometimes reviled, for his leadership style. Under Welch’s leadership, GE became the largest company in the world, by market cap at $500 billion. He was crowned “manager of the century” by Forbes in 1999. When he was CEO the market cap was around $14 billion, and in 20 years he grew it to $500 billion. IF you owned GE shares at that time you made a lot of money.

He was a chemical engineer by training, with a PhD. in chemical and bio-molecular engineering. This education certainly tied in with one of his nicknames as “neutron Jack.” Although, this moniker was for his focus on making cuts or divestitures.

Welch gave his mother the credit for instilling in him the hard work necessary to be successful. One great story I uncovered when reviewing his life, is from a story by Paul Batura (wrote a biography of the illustrious Paul Harvey – highly recommend this book) that goes as follows:

“If there was one story of his mother that he told time and time again, and that seemed to sum up her blend of warmth with her penchant for bluntness, it was the aftermath of a high school hockey game against an archrival, which Jack’s Salem High team lost in overtime.

Frustrated with the defeat, Jack flung his stick across the ice, retrieved it and headed to the locker room. A few minutes later his mother appeared inside, and in front of all his teammates, laced into him for his poor sportsmanship.

Looking back on the embarrassing confrontation, Welch expressed gratitude for his mother’s willingness to be honest with him. She was a woman who didn’t suffer fools lightly.

“The insights she drilled into me never faded,” he recalled. “She always insisted on facing the facts of a situation. One of her favorite expressions was ‘Don’t kid yourself. That’s the way it is.’”

A couple of takeaways:

Welch had another side as expressed by a colleague, Jeffrey Sonnenfeld, who served as full tenured professor at Emory’s Goizueta Business School for a decade and a professor at the Harvard Business School for a decade, and who is currently the senior associate dean of leadership programs as well as the Lester Crown Professor in the Practice of Management for the Yale School of Management, as well as founder and president of the Chief Executive Leadership Institute, a nonprofit educational and research institute focused on CEO leadership and corporate governance. Sonnenfeld brought Welch into his MBA programs to talk with the classes. His friendship provided him with a different perspective:

“His greatest legacy was his leadership development commitment. Welch was not a snob and would talk with anyone – to learn something new or discover rising talent. His renowned Series C meetings every 90 days were very tough periodic talent reviews which he cared about almost as much as business unit performance.

He taught many GE Crotonville management classes himself. His progenies included: Jeff Immelt of GE; Bob Nardelli of Chryslers; Jim McNerney of Boeing; Dave Cote of Honeywell, Jeff Zucker of CNN, Davis Zaslav of Discovery. He was all business. He was blunt and direct, ruthlessly competitive but had no tolerance for bigotry.

He demonstrated the need for CEOs to focus on shareholder value, reinvigorating a hidebound bureaucracy for a new era, and to develop new leaders as a top priority.”

And there are the detractors that saw Welch as a cutthroat leader who was famous for tough decision-making by seeming to forget there were humans involved. He had a “vitality curve” that grouped people into a 20-70-10 structure. The top 20% are the superstars and should be left alone. The middle 70% need care and feeding to continue to get better. And the bottom 10% should be cut from the team.

Personally, I had a hard time understanding this. However, if you knew the rules of the game when you joined any of the GE companies, then you accepted the possible outcomes. Full stop.

There is a retired Navy SEAL, Jocko Willink, that describes a principle that he sees as essential called “Extreme Ownership.”  This book and his associated podcasts and interviews describe the principle in detail and in many situations. Jocko places the responsibility for actions with each individual. And for leaders this is absolutely critical for your success.

Famed leadership researchers and authors, James Kouzes and Dr. Barry Posner of “The Leadership Challenge”  have the best definition of leadership I have ever seen “a leader is someone others willingly follow.” Willink also reinforces this in his assessment of leadership capabilities. As a SEAL team leader he accepted responsibility for his actions and this gave his superior officers confidence in his future actions and gave his teams the trust that he would always take care of them.

And Willink is not soft. He has high expectations of himself and of his people. Check out his website for examples of his discipline and focus.

I have never been an advocate of blindly following a particular leadership style. Many of the greatest leaders were not easily copied, for a variety of reasons. Not least of which is that you need to be true to yourself. Don’t try and be someone else, be yourself. However, adapting successful strategies or tactics to suit your own situation can be very productive.

If you chart the way, provide care and feeding of your staff, and act according to your values, you will likely be successful as a leader.

And the hard work continues…who knows where you will end up?!